Client Success Stories
​-In a dead end job and couch potato addicted to romance novels, Jill, 54, struggles to get through the day. The she discovers through her Cocoon to Butterfly drawing, there is a “fire alive and burning” within her and starts to write.  By the end of the process she is a published author ready to give notice at work when the next advance come in from her publisher. She transforms her connection to the prison of her mind to the prism of her creativity.

-After retiring as a high school administrator, Martha vacillates between short joyful moments of freedom and long scary episodes of dread at the unscheduled time in her day. In her Cocoon to Butterfly process, she discovers the dancer within her and uses dance as a meditation practice to rise above her anxiety and find freedom within herself. She transforms early childhood shame into joyful expression.

-Executive Assistant to a high-level CEO, Mattie finds herself depleted at work, serving egocentric men focused on bottom line profits and craves to feel more alive and connected to something deeper.  Her Cocoon to Butterfly images revealed a tightly tangled knot she entitled “Stuck” that transformed into a goddess figured she named “Listening”. Realizing she needed to listen to herself, she carved out time on a regular basis to make art and eventually found the courage to walk away from her past. She releases her conditioning on the need to be loved by a powerful person to loving herself as a powerful person.
​
-Samantha, a 30-something bright executive desperately wanted a child and a husband.  Her Cocoon image was tight ball she called “Trapped”. After 6 months in a Cocoon to Butterfly group, she discovered the real thing she wanted was connection. By applying the principle of the second stage-the caterpillar and “allowing your creative tension to exist and be uncomfortable”, she made a breakthrough.  Samantha accepting her life as it is said, “With or without a man, it doesn’t matter, as long as I am true to myself.” Her higher awareness was activated by her creativity and she became free of her “trapped” tight ball of stress.

-49 year-old Sue knew things needed to change in her marriage, career and life.  She was confused and frustrated. Exploring the symbolism of what she wanted to become, entitled “Fresh Wind”, she recognized it as representing a freedom she experienced sailing in the Caribbean. In the months that followed, her daily creative practice supported her discovering how to “Trust my path and follow the creative process.” Several years later, the school system she taught at, offered her early retirement at full benefits. She jumped at the chance and now spends half the year sailing in the Caribbean. She was able to let go of her old beliefs and connect to her passion to reinvent herself.

-Joanne, a 59-year-old account executive for a top Wall Street Firm, felt her golden handcuffs kept her tethered to “Chaos, continual” at work, the name of her Cocoon drawing.  After several months of journaling and creative meditation she began to face her avoidance pattern to dealing with uncomfortable feelings. Her goal was to become “The Calm Center”, her Butterfly drawing.  Curiously enough, as soon as she achieved a calmer lifestyle her company offered her a promotion to lead a larger group of people. She took the higher pay, now making more than a half a million dollars and claims to maintain her calm center, through her daily creative meditation practice.

-Neurosurgeon Robert, was aching to play more music in his life. Between the politics at the hospital and long hours with his patients, he began to resent his beloved career and felt he had little time to pursue his musical pleasures. His vision of himself playing music, “Freedom” as he called it, seemed a pipe dream. Yet in the Cocoon to Butterfly process he dedicated himself to a daily 30-minute creative meditation practice in his home office where he would play music on his computer with Garageband before going to bed.  Music started spilling over while in board meetings at the hospital, where he would play air guitar under the table. Naturally, when a group of professionals from the hospital formed a band, he become involved in their weekly practice and felt a new sense of freedom. By connecting every day to his creativity, Robert organically evolved into a life he loved again.

After you go through the Cocoon to Butterfly Process,
you may need a new driver's license! 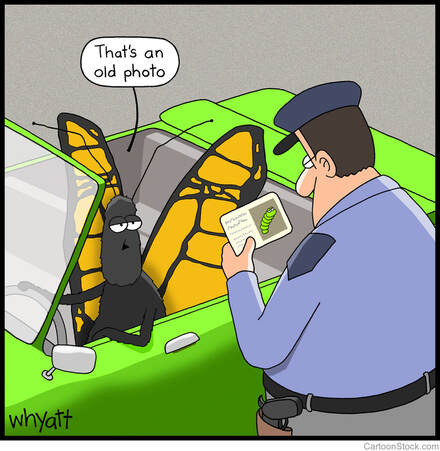 “I find that after each session with Lisa my creative passion and manifestation is heightened in my music and life art.”
​~ Steven Halpern, Ph.D.    Recording Artist & Author of “Sound Health” Father of New Age Music